Jeremy is extremelly motivated and athletically driven. The oldest of three rambuctious brothers, Jeremy is quite used to leading and teaching, especially where sports are concern. His mother is a soccer mom while his dad was a football coach, and due to his parents influence, it shouldn't surprise anyone how athletically successful Jeremy is. He is friendly, focused, and driven. Although similarly he is also competetive and naive. Because of this, Jeremy finds it easy to fall for the "right" girl, which often results in redirecting his priorities. Independent, yet vulernarable to manipulation, Jeremy is confident that he will win.

Jeremy is tall, lean, and atheletic. He is hispanic and has brown eyes and short brown hair. He wears a maroon cap that he wears backwards. He wears a marroon jersey with black triangles on the shoulder blades and on the sides. He wears pitch black atheletic shorts and red sandals. 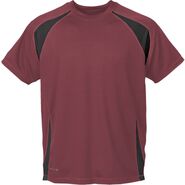 Add a photo to this gallery
Retrieved from "https://totaldramaparadise.fandom.com/wiki/Jeremy?oldid=4258"
Community content is available under CC-BY-SA unless otherwise noted.